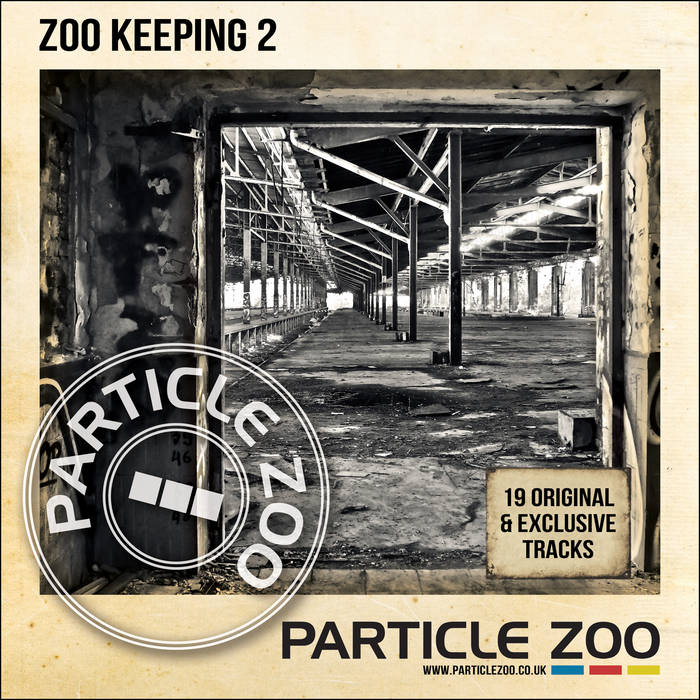 Indie Electronic label Particle Zoo Recordings have curated a brand new Free Compilation featuring some of the hottest rising talent and established artists in the electronic music world. Pow. Just like that.

Weighing in at a hefty nineteen exclusive tracks, ranging in tone from soulful Electronica, quirky Synth-Pop, and Deep House with actual depth, to varying shades of DnB and party-starting Midtempo, Big Room House and Ambient Downtempo, Zoo Keeping 2 will give you all kinds of feels. Big feels.

Zoo Keeping 2 is a Free Compilation comprised of exclusive tracks from some of the hottest undiscovered electronic producers, artists and bands on the planet.
Get your copy exclusively at Bandcamp on a Pay What You Want basis.

Please direct all enquiries and feedback to ewan@particlezoorecordings.com

Particle Zoo Recordings is an independent electronic music label run by Adam Hignell and Dave Bushnell. Originally Particle Zoo was started as a platform for their own musical output under their respective Ewan Hoozami and Dave RMX monikers.

Previous Particle Zoo releases have earned airplay on BBC Introducing in the South, The West and national Radio BBC 6 Music, plus features on Tom Robinson’s esteemed Fresh On The Net playlist, and sync deals with sportswear giants Adidas.

Artist: Tundra
Track: Got U

Tundra Got U opens proceedings in suitable style. A newcomer to the London electronic scene, this guy has the brightest of futures ahead of him. His productions are accomplished and remarkably moving, as Got U attests.
soundcloud.com/tundra_uk/

Web Sheldon is another exciting newcomer from London, only this one sings as well. Combining traditional singer-songwriter sensibility with high-end electronic production aptitude. All That Money Can’t Buy is an impassioned lament for a world lost to ultra-capitalism. Addressing issues often eschewed by Electronic artists, Web Sheldon is an artist unafraid to make a statement something all too rare in today’s populist landscape.
soundcloud.com/websheldon

Don Dayglow released his first music in January this year on the world famous Midnight Riot Records imprint, and has already amassed a passionate following with some exceptional edits and remixes of classic Disco. Her Love is his first fully original production; a Deep House floor-filler packed with bass and euphoric instrumentation.
soundcloud.com/don-dayglow

Crash Party have surfaced after a long festival season smashing stages across the UK with the Ghetto Funk crew. With their debut Ghetto Funk EP being one of the most downloaded in recent history, these guys are certified when it comes to Midtempo Party Breaks. Babylon is a dubbed out, sub-filled slice of dancefloor gold.
soundcloud.com/crashparty

Rapper/Producer/Nomadic Journeyman Audible One infuses every track he writes with a feel-good, uplifting and welcome shot of soul-stirring positivity. Goes Around is pure summer Drum and Bass anthem in the making, with a delectable vocal performance from Polly Anderson adding her summery, breezy vocal to this upbeat dancefloor track.
soundcloud.com/audible1

As 5 times DMC UK Scratch Champion Asian Hawk knows a thing or two about the ones and twos, and may be the originator of what he’s coined ‘Turntable Soul’ - a performance style which sees him sing and DJ at the same time over his own productions, expertly crafting fully-fledged songs out of carefully selected loops and breaks. He is also known for his lead singer in rising future jazz act Jackson, soon to blow up in the UK music scene.
Under the moniker O.Love, his Youtube videos are racking up tens of thousands of hits and it’s not hard to see why. My Favourite is a catchy Stevie Wonder-esque soul number that’s bound to get stuck in your head for days.
soundcloud.com/olove001


Artist: Dopedemand
Track: Only For Kisses

Kasparov can hardly be classed a newcomer, being as he is a long-time resident of legendary Bristol clubnight Blowpop. Now based in Dubai, he’s finally taken the plunge and started to release some of the tunes that have been underpinning his DJ sets for years. Gambit is a stripped back, rolling Drum n Bass number that harks back to the late 90s sound, one of the finest eras in DnB history.
soundcloud.com/kasparov

Actual Doctor is an actual Doctor...of Philosophy, specifically Music Theory, which makes him eminently qualified to deliver his brand of academically accomplished dark Synth-Pop. Stark, absurd and darkly humorous lyrics delivered with gothic passion over dense, operatic instrumentation calling for change at a politically structural level. Actual Doctor may not be the man to deliver such change, however, as he’s not the Revolution Type.

Having written songs for some of Bristol’s foremost Urban acts, including Buggsy and Javeon Mac, Onesoul has long deserved greater recognition as an artist in his own right. Glass House is a Mndsgn-esque electronic hip-hop instrumental with skittering percussion and trademark glossy, shimmering instrumentation that belies his burgeoning reputation. Under new management and with a forthcoming EP on Particle Zoo Recordings, Onesoul’s brand of Urban Soul is set to turn his undoubted potential energy kinetic in the coming months.
soundcloud.com/omarineosoul

Mr Bird is a certified heavyweight in the Broken Beat/Jazz/Soul world. The Lisbon-based producer has worked with the likes of Tom Moulton, Andre Espeut, Greg Blackman and released music on some of the greatest modern independent record labels of our time including the legendary BBE. On Soultime Baby he delivers a wonky slice of Electronic Hip-Hop reminiscent of the hugely under-rated Sosumi.
soundcloud.com/mrbird


Artist: Dr Moody
Track: I Believe In You (AM Mix)
Dr Moody hails from Bristol, and, along with Kasparov, is also a long-time resident of Bristol Clubnight institution Blowpop. This accomplished producer, recently working with Onallee and D Product on the hugely popular Futurism 3.0 show, provides a driving Breakbeat banger full of soul, bass and masterful production with his track I Believe In You (AM Mix)
soundcloud.com/doctor-moody


Artist: May May And The Woods
Track: Chasing Unicorns (Drive Mix)

May May And The Woods are a husband and wife songwriting/production duo with a penchant for 1980s Power-Pop and long-forgotten VHS soundtracks. Together they write music with a pronounced nod to the pioneers of Synth-Pop, while retaining a definitive sound of their own. Chasing Unicorns (Drive Mix) combines cinematic, stripped back synthesis with powerful arrangement and modern Indie vocals reminiscent of Rag n Bone Man or The Killers.

Label-boss Dave RMX rocks the funky beats with a Midtempo banger that calls you to the dancefloor and then takes all the chairs away so you just have to keep dancing. In a melancholic world we all need the odd shot of pure ‘hands in the air’ escapism, which Hustler’s Anthem enthusiastically provides. Bounce!
soundcloud.com/thedavermx

Kreen's brand of expertly-crafted, tearout Drum and Bass, akin to the likes of Tantrum Desire or Noisia, leaves the dancefloor gasping for breath. Sampling an obscure British radio play, from cassette tape, Escape Velocity is an aggressive and rowdy journey bound to make you screw-face in the midst of rolling amens and driving basslines.
soundcloud.com/kreendnb

The mysterious STEGA has released on labels as disparate as Top Billin’ and Legere, yet not much is known about him. Thunder Thighs is a preposterously-titled Tech House banger; a real beefcake of a track that retains enough elegance to avoid any Hard Dance clichés.

Closing proceedings on Zoo Keeping 2 comes Aeon Musk, a band of brothers who combine their love of synthesis and space ephemera to bewitching effect. Using a plethora of hardware synthesizers and drum machines, Time was performed and recorded in one take using a dazzling array of gadgetry. With releases scheduled on Interzone and Particle Zoo, Aeon Musk are set for blast off.
soundcloud.com/aeon-musk